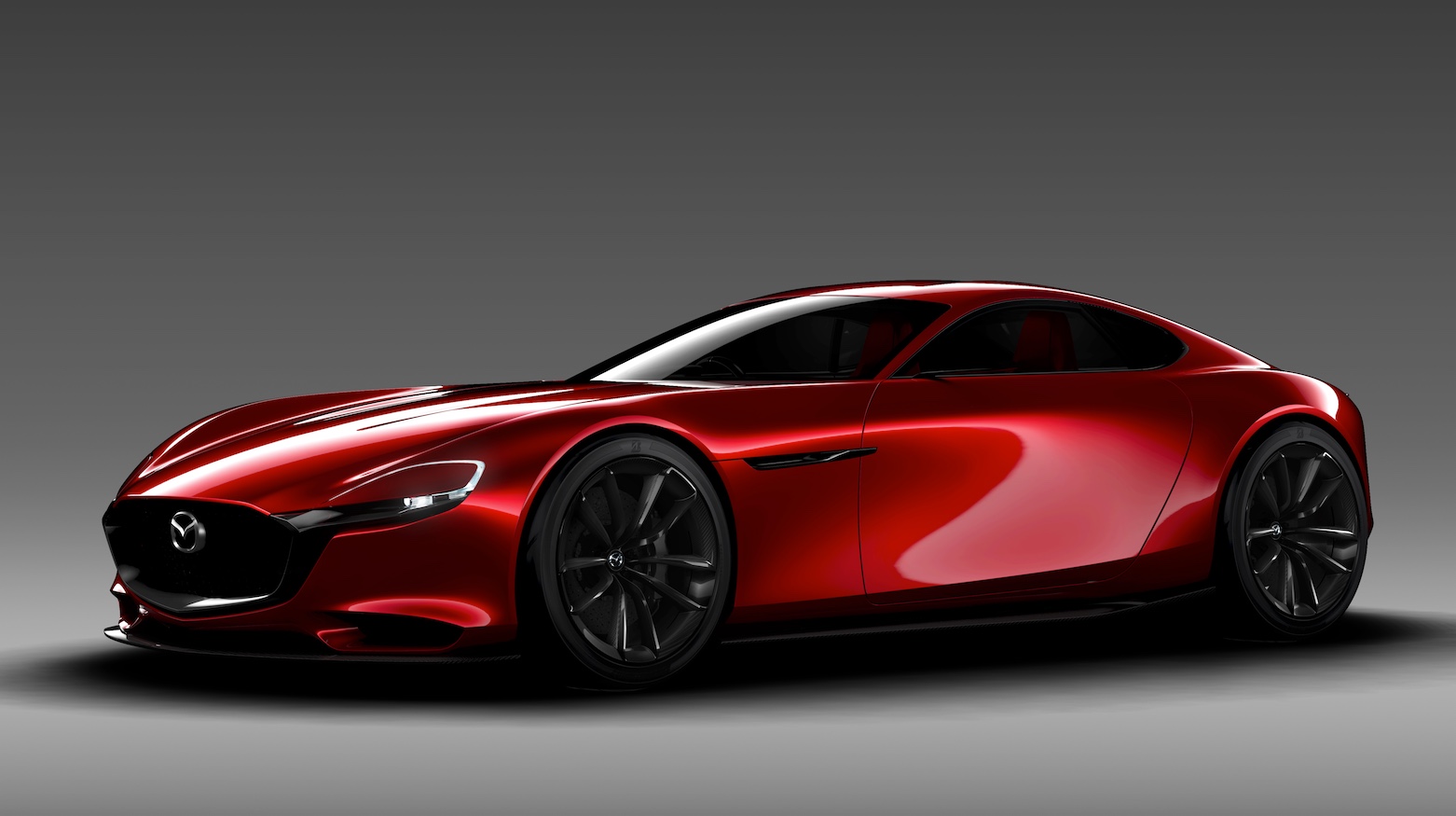 Every automaker takes pride in their engines, but few match the passion and conviction shown by Mazda. Mazda has reason to believe it’s on the right track; in 2016, for the fourth year in a row, the U.S. Environmental Protection Agency named the company, whose fleet-wide adjusted fuel economy performance is 29.6 miles per gallon, the most fuel-efficient auto manufacturer in America. Mazda achieved this distinction despite offering not a single all-electric or plug-in, and only one hybrid electric model. No surprise, then, that Mazda’s approach to electric vehicles has been relatively tepid.

Nonetheless, Mazda has announced that, starting in 2019, it will introduce electric vehicles and other electric drive technologies. And, by 2030, according to a recent report in the Japanese outlet Kyodo News, Mazda anticipates that all of its models will use electric motors; this does not mean that every vehicle will be fully electric, but each will have an element of electrification. This follows on the heels of similar news from other major automakers, most notably Volvo and Jaguar Land Rover, who are also transitioning to electrified powertrains.

What’s particularly interesting about Mazda’s news is that the company says it will be releasing electric powertrains “in regions that use a high ratio of clean energy for power generation or restrict certain vehicles to reduce air pollution.” This principle is set forth in Mazda’s recently updated long-term vision dubbed “Sustainable Zoom-Zoom 2030.” 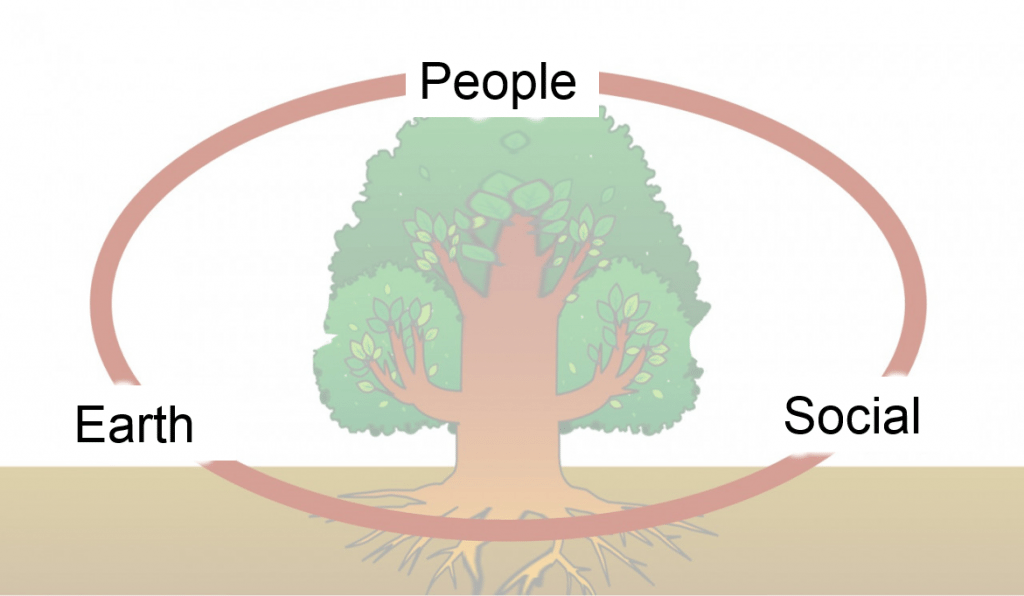 By limiting deployment of electrified vehicles to regions meeting these specific characteristics, is Mazda adopting the “compliance car” mentality under which EVs are sold only to avoid penalties, or is Mazda looking to examine various regulatory and environmental market attributes and determine which of its vehicles will create the smallest environmental footprint by balancing tailpipe emissions against power plant emissions?

The goal appears to be to deploy gasoline and diesel vehicles where emissions from tailpipes are lower than from power plants, and electrified vehicles where electricity generation is cleaner than tailpipe emissions.

It is well known that the fuel used to generate electricity makes a big difference in the type and quantity of greenhouse gases produced per mile driven by an electric vehicle. According to a study by the Union of Concerned Scientists, electricity from American power plants fueled by natural gas instead of coal results in a 51% reduction in greenhouse gas emissions. The following table (reproduced from the UCS’s 2015 study titled “Cleaner Cars from Cradle to Grave; How Electric Cars Beat Gasoline Cars on Lifetime Global Warming Emissions) shows the benefits of each fuel type: 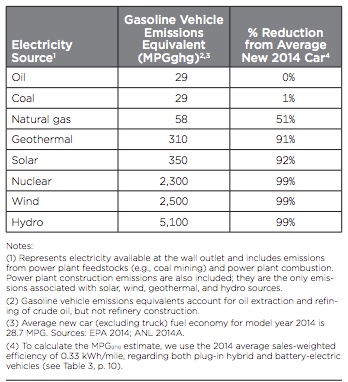 Fuel mixes vary regionally, within regions, by time of day, and based on prevailing market conditions. In general, though, the overall fuel mix by region in the U.S. is as follows: 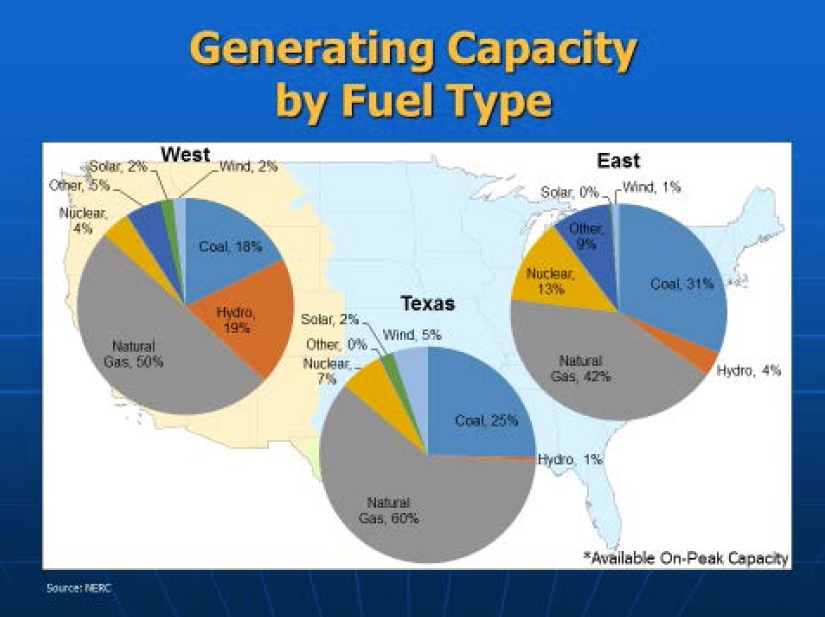 The good news is that, overall, electricity generation in the U.S. is increasingly powered by natural gas and other technologies that are cleaner than coal, with the trend toward clean energy clearly continuing. Because natural gas is largely displacing coal, the result will be reduced air emissions. 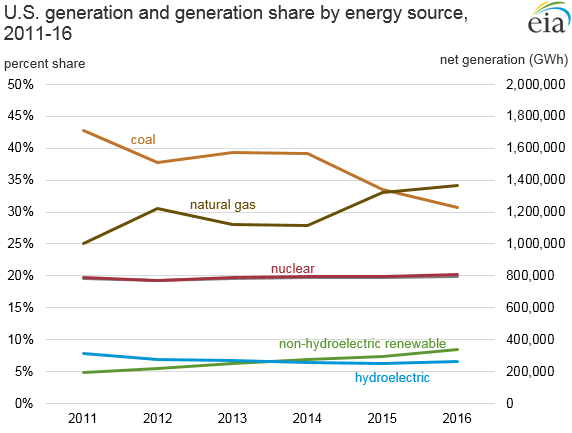 Regardless of the overall fuel mix, individual customers’ electricity is generally derived from a variety of fuel sources at any given time based on economic dispatch directed by regional grid operators.

Even without renewable energy credits, though, drivers who plug into the grid at night are likely to be fueling their vehicles with at least some wind power. This is because onshore wind is typically strongest at night. The following chart illustrates wind generation in PJM over three days earlier this month, with each of the peaks occurring during overnight hours:

Solar power is having a comparable (though inverse) effect during daylight hours, as shown in the following “Duck Curve” graph from the California ISO (the state’s electrical grid operator), which illustrates demand for traditional electricity falling during the day and then quickly increasing at dusk; this energy supply coincides with EV drivers charging while at work: 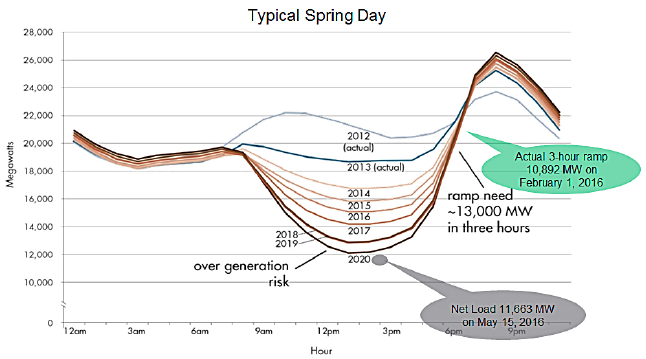 The amount of energy produced from wind and solar is growing as the price of installing these technologies continues to fall due to reduced costs and increased productivity.

Compared to countries with less-stringent air quality regulations, both power plant and tailpipe emissions in the U.S. are relatively clean. For this reason, the Union of Concerned Scientists has concluded:

Globally, as the cost of batteries falls and vehicles’ electric ranges increase, driving electric will become more and more feasible. In countries with weak electrical grids, proliferating distributed energy resources such as solar, wind, and battery storage can serve to strengthen the grid, improve reliability, and bring cleaner air.

Whether fueled by electricity or gasoline/diesel, the transportation sector is a key factor in reducing greenhouse gasses. Because electric vehicles, when paired with the decarbonizing electricity sector, will bring so many benefits, every auto manufacturer offering EVs is to be applauded. Mazda’s plan is not only commendable, it is also highly thought-provoking because the company is taking a rational approach to its sales strategy with the purpose of not only doing well financially by responding to the clear market demand for electrified vehicles, but also doing good by strategically deploying vehicles where they will be most effective in helping the planet.