Vast Majority of Planned Capacity in PJM is Natural Gas, Wind, and Solar

PJM Interconnection, which is the largest grid operator in America and serves more than 61 million people throughout 13 states and the District of Columbia, this week released its annual Regional Transmission Expansion Plan (RTEP). The RTEP is an important document because it charts the path for how PJM plans, over the next 15 years years, to dispatch more than 171,000 MW of generation capacity across 72,000 miles of transmission. To develop the RTEP, PJM annually conducts a thorough “stakeholder process” involving nearly 1,000 members, the Independent Market Monitor, and state public service commissions and other governmental and non-governmental organizations, all of whom gather with PJM’s planning department to consider how to implement a wide range of considerations such as:

On the load side, PJM finds in the latest RTEP that flatter load growth means fewer network upgrades will be required. PJM attributes flat load growth to factors such as a slow recovery from the 2008 recession, increased efficiency in manufacturing and home appliances, and solar power.

On the generation side, PJM is experiencing a shift from coal to natural gas due primarily to inexpensive gas from the Marcellus Shale, but also as a result of coal plant deactivations driven by increasingly stringent environmental regulations. In addition to new gas resources, new wind and solar resources are being driven by favorable state and federal incentives, along with demand response and energy efficiency.

As discussed below, the 2015 RTEP shows that, with new projects in the pipeline overwhelmingly gas-fired, the trend away from coal appears certain to continue: 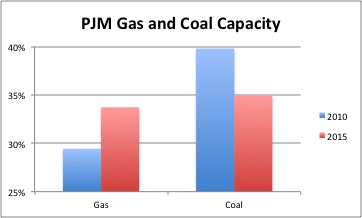 The generation mix reflected in the latest RTEP shows several dramatic shifts in installed capacity from only five years ago, most notably:

But a truly momentous shift is reflected in the queue for new resources, with natural gas accounting for a whopping 87 percent of all queued capacity rights (72 percent when based on nameplate, with wind accounting for the bulk of the difference due to the large difference between wind’s nameplate and projected actual output):

With the extension in late 2015 of the Investment Tax Credit for wind and solar we should expect to see a sharp up-tick in those resources in the 2016 RTEP, but these will likely be in addition to, and not necessarily instead of, natural gas.