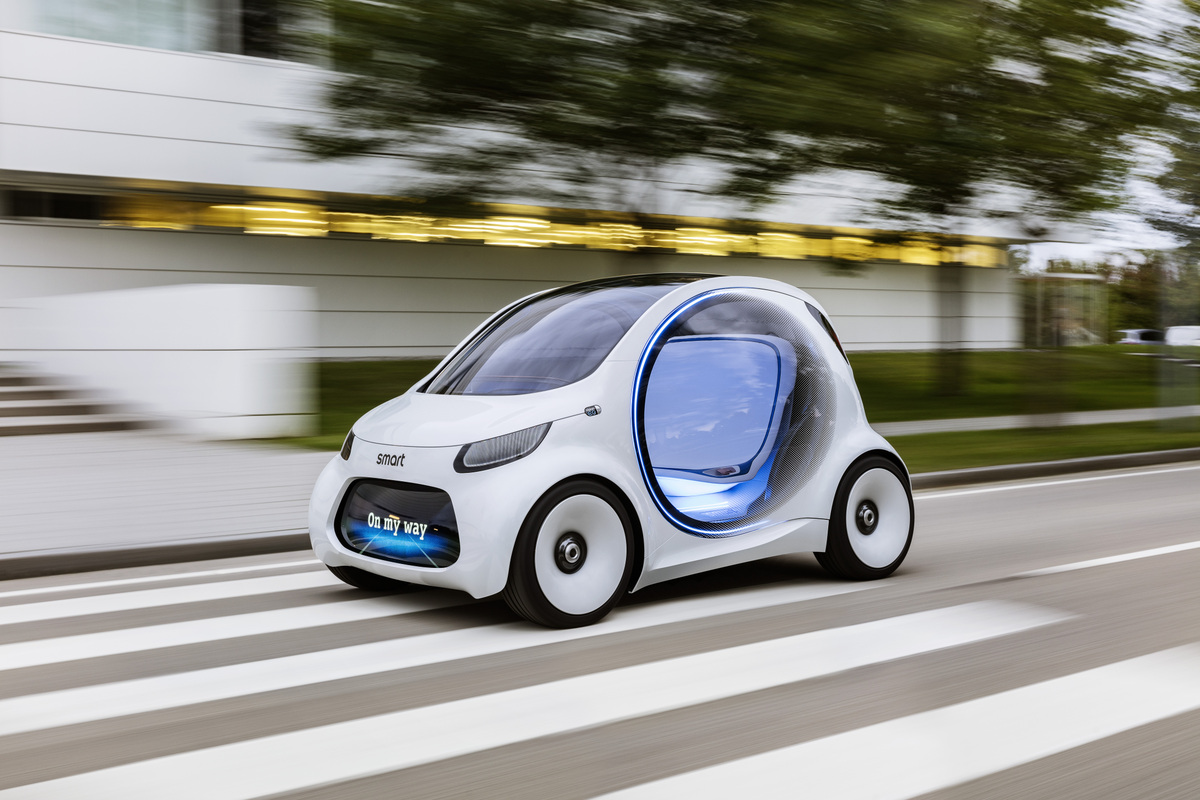 Just weeks after more than two-thirds of Smart’s U.S. dealerships elected to stop selling the small vehicle following news that the brand would be shifting to all-electric, the next-generation “Smart vision EQ fortwo” concept vehicle has been introduced. The most prominent feature of the Smart concept is what isn’t there: no steering wheel or pedals. 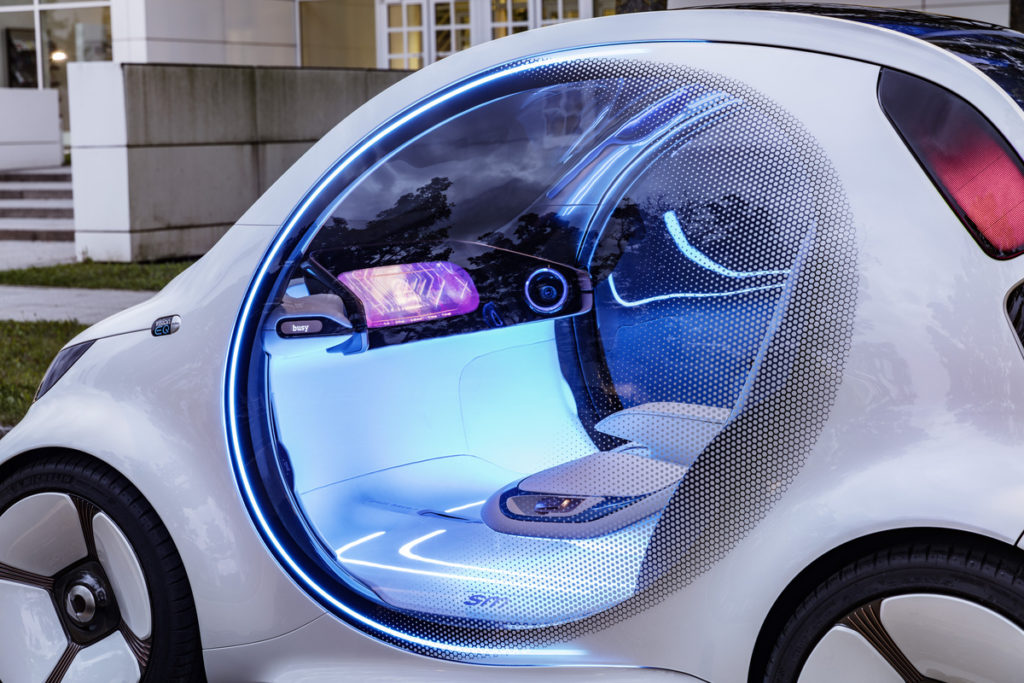 Designed to showcase a new vision of urban mobility, the concept vehicle expands on parent company Daimler’s long range “EQ” plan and offers a glimpse into what Daimler has in mind for the future, which includes ten electric vehicles scheduled to launch by 2022. (Smart is a division of Daimler AG and is distributed in the U.S. by Mercedes-Benz USA.)

Smart’s concept is a shared autonomous electric vehicle that will pick up passengers directly from their designated location. And don’t worry about getting into the wrong car, as so many of us have with Uber and Lyft (even with real drivers at the wheel!). Daimler’s future autonomous vehicles will solve that problem with a message board displaying the name and photo of the next passenger on the front of the vehicle: 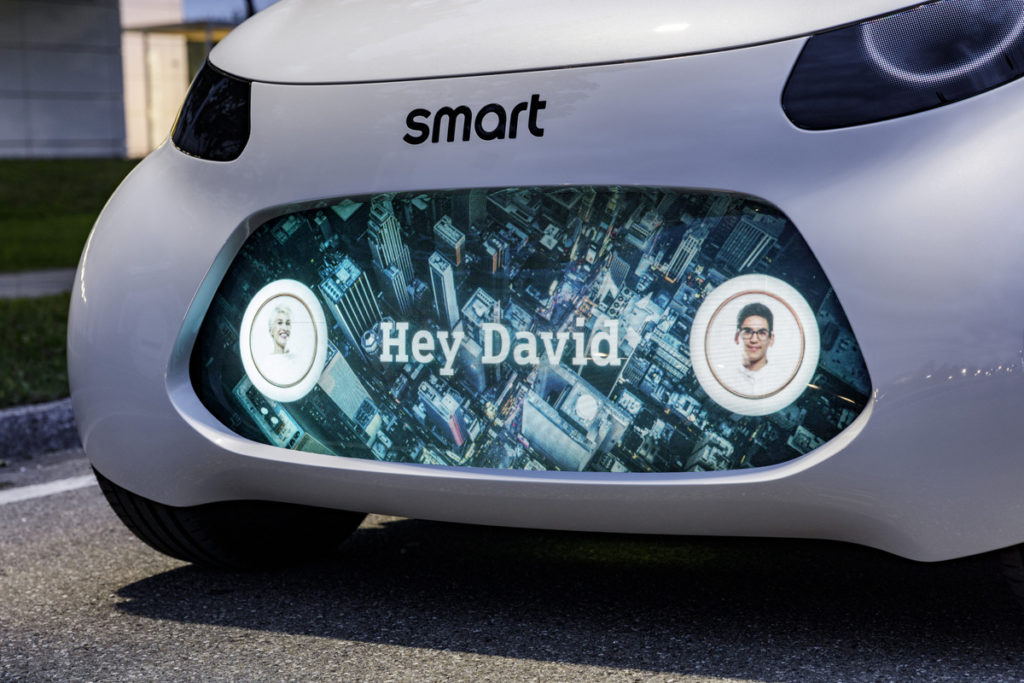 “The Smart vision EQ fortwo is our vision of future urban mobility; it is the most radical car sharing concept car of all: fully autonomous, with maximum communication capabilities, friendly, comprehensively personalizable and, of course, electric,” says Smart CEO Annette Winkler. “With the Smart vision EQ fortwo, we are giving a face to the themes with which Mercedes-Benz Cars describes the vision of future mobility within the CASE strategy.”

CASE stands for Connected, Autonomous, Shared, and Electric, and this strategy is a significant undertaking at Daimler. As described by Chairman of the Board Dieter Zetsche, “each of [the CASE features] has the power to turn our entire industry upside down. But the true revolution is in combining them in a comprehensive, seamless package.”

Most of the 27 remaining Smart dealerships are in states with zero-emission vehicle requirements, and a cynic would conclude that EVs can’t make it without a regulatory requirement or heavy subsidies. But that’s not true, as evidenced by Germain Motor Group’s decision to continue selling electric Smarts in Columbus, Ohio, a state with no zero emission vehicle (ZEV) requirement. Unusually high demand for electric vehicles in Columbus appears to be driven by a coordinated emphasis of the benefits of decarbonizing transportation and an effort to mitigate obstacles to charging and driving electric vehicles.

This is all happening because Columbus, the winner of the U.S. Department of Transportation’s Smart City Challenge, is launching the Smart Columbus Electrification Plan. “Columbus has established itself as a leader in electrification with its ‘Smart Columbus’ initiative,” Germain COO John Malishenko wrote in an email reported by Automotive News. “It’s well funded and focused on making Columbus a leader in alternative transportation solutions, so for that reason, we’ve decided to stay put.”

The fact that sales in Columbus remain at a level high enough to warrant keeping the dealership open in the absence of a regulatory mandate demonstrates that a concerted effort to shift behavior can cause meaningful change for the better. Only time will tell whether the 58 departing dealers should have stayed Smart.