Mercedes-Benz today unveiled an aggressive plan to electrify its fleet. Dubbed “Generation EQ” (EQ stands for Electric Intelligence), the first glimpse of the future is an all-wheel drive sport SUV coupe concept (shown above) having an output of approximately 400 horsepower (with 0 to 60 mph in under 5 seconds) and an all-electric range of more than 300 miles.

The mobility of the future at Mercedes-Benz will stand on four pillars: Connected, Autonomous, Shared and Electric. Generation EQ is the logical fusion of all four pillars.

Elaborating on the particular subject of electrification, Zetsche announced that “the emission-free automobile is the future.” Recognizing the consumer interest and regulatory imperative to reduce tailpipe emissions, Generation EQ is the clearest signal to date that Mercedes is committed to the transition from gasoline to electric transportation.

Mercedes’ new generation of electric vehicles will be based on an architecture developed specifically for battery-electric models, and which the company says is scalable in every respect and is usable across all models. For example, all system components, especially the batteries (which can be configured to exceed 70 kWh of storage), are variable thanks to a modular building-block system. Vehicle weight is an important consideration with regard to safety, fuel efficiency, and cost, and Mercedes’ new vehicle architecture builds on an intelligent multi-material mix of steel, aluminum and carbon fiber already incorporated in the company’s latest models.

Customization, Touch-Based Controls, and No Knobs 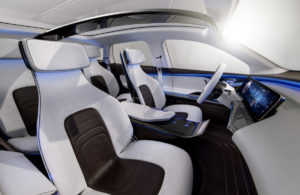 The focus of the driver-oriented cockpit is on simple, touch-based controls. The innovative digital user experience differentiates Generation EQ from the familiar controls in today’s vehicles, while giving a peek into the future of user interaction at Mercedes-Benz.

Unlike traditional dashboards containing a predetermined (and typically mechanical or physical) set of controls and displays, the Generation EQ concept features a massive and customizable 24-inch TFT high-definition wide-screen display presenting as much, or as little, information as the driver desires. In a nod to the fact that the vehicles will be all-electric, a clever and convenient feature is that the navigation display will inform the driver about their driving style and how to achieve the best possible range, while also showing all the destinations that can be reached based on the battery’s current state of charge and other relevant factors such as outside temperature and vehicle speed.

Features such as climate control and infotainment systems are controlled via touch controls on the digital display rather than physical buttons. Generation EQ also does away with conventional exterior mirrors; instead, cameras project an image of the traffic behind onto integrated displays in the doors. 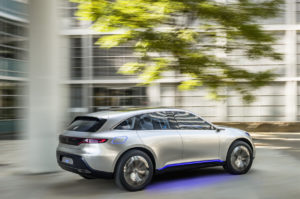 With regard to charging, Generation EQ brings together the latest technologies. The vehicle is ready for Level 2 wired and wireless charging, as well as for rapid charging at direct current (DC) fast chargers. Mercedes is adopting the Combined Charging System (CCS) protocol that is also generally being used by all of the European and American OEMs (other than Tesla). Today’s CCS chargers typically top out at 50 kW, though output up to 150 kW is possible. In the medium to long term, a charging capacity of up to 300 kW is planned. This would enable sufficient power for 60 locally emission-free miles to be recharged within five minutes.

Many EV drivers like the ability to charge their vehicles using solar power but this is not always possible, for example when the vehicle is not home during the day when the sun is shining. To serve this market, Mercedes will be offering battery systems so that solar energy produced but not consumed by other electrical devices in the home can be stored for later use. Policies relating to home solar production vary greatly by utility and by jurisdiction, so before investing in stationary batteries customers should explore the economics of storing excess energy vs selling it back to the grid. 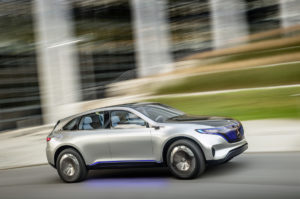 No major announcement would be complete without a discussion of autonomous driving technology, and Generation EQ checks that box. Using highly accurate maps, the vehicle’s systems know millions of data points, including for complex scenarios such as traffic circles. By intelligently combining a massive amount of information from many difference sensors and data sources, a process Mercedes calls “sensor fusion,” the vehicle can automatically adjust the speed and driving dynamics to assist the driver in a wide range of situations.

Anticipating a future in which cars will talk to each other as well as to surrounding infrastructure, Mercedes is incorporating “Vehicle-to-X” technology. This will be important for services such as safe autonomous driving, notice of relevant information (including but not limited to safety), enhanced navigation, and route options to maximize mileage based on the battery’s state of charge and information about charging stations when necessary.

The concept vehicle unveiled today is described as “close to production,” and will be the foundation for battery-electric vehicles across all models, from the compact to the luxury class.