Electric vehicles possess many advantages over their internal combustion engine counterparts, but extremely cold weather remains a challenge because it prevents batteries from performing at optimal levels. For this reason, demonstrating all-around performance under extreme winter conditions is an important milestone for new models. Jaguar and Mercedes recently announced the successful completion of cold-weather testing for, respectively, the I-Pace and EQC.

Mercedes-Benz and Jaguar, along with many other OEMs and suppliers, test their vehicles (including EVs) in the northern Swedish town of Arjeplog (AR’-yuh-plog), home to more than 1,000 miles of track and where temperatures drop as low as -40°C. More than 3,000 engineers make the annual pilgrimage to the small town, more than doubling the permanent population.

Tests that are specific to electric vehicles typically include motor and battery performance, vehicle range, and climate control. Battery charging is also assessed under extreme cold conditions; for this, the facilities at Arjeplog have been equipped with a full range of hardware ranging from household receptacles to high-powered DC fast charging. 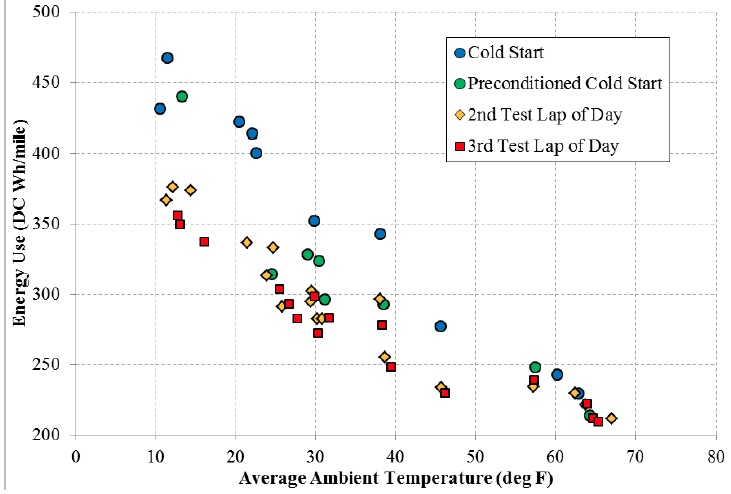 To mitigate the challenges that extreme temperatures have historically presented to EVs, vehicle manufacturers are making sizable investments and collaborating with the U.S. Department of Energy and a wide range of suppliers to develop solutions. For example, because batteries do not hold a charge in the cold as well as they do in mild temperatures, electric vehicles typically possess integrated heating technology to warm the battery. But because battery heating itself uses energy that otherwise would be used for driving, alternative solutions are also being researched.

One tactic that EV drivers in cold climates can take is to park their vehicle in a climate-controlled garage; this is because an EV that is “soaked” in extreme cold (i.e., parked outdoors) prior to being driven in very cold weather will experience a diminished range as compared to the same vehicle driven the same distance but parked in a relatively warm garage prior to being driven.

Another challenge for EVs in cold weather is that generating heat for the passenger cabin requires using energy stored in the battery that would otherwise be used to propel the vehicle. Internal combustion engines do not face this situation because they produce large amounts of waste heat that can be used for comfort. EV drivers can mitigate the problem through measures such as heated seats, a heated steering wheel, and pre-heating (which entails activating the heater prior to beginning a trip and using energy from the grid rather than the battery).

Other techniques for maximizing range include:

Update on the new Jaguar I-Pace and Mercedes EQC

The Jaguar I-Pace, which went on sale last week, is equipped with a 90kWh lithium-ion battery that delivers an estimated 240 mile all-electric range. The vehicle is capable of being charged from zero to 80 percent in about 40 minutes using a 100kW charger, which is nearly as fast as Tesla’s 120kW superchargers and twice as fast as non-Tesla DC fast chargers deployed in the United States. Ian Hoban, Jaguar’s Vehicle Line Director, said of the I-Pace:

Not only will the I-Pace charge quickly enough for our customers to carry out their everyday lives, it will offer powerful and precise performance in a variety of conditions and climactic extremes. Allied with the versatile credentials of our celebrated Pace family, this will be an electric performance SUV like no other.

Mercedes has not yet released final specifications for the EQC, but the company previously reported that the vehicle will have an estimated 300 mile range. Market launch for the EQC is expected to be in 2019, and the company’s entire lineup is slated to be electrified (either fully electric or mild-hybrid) by 2022.

The all-wheel drive EQC is based on Daimler’s EQ concept, which was introduced in late 2016. Commenting on the vehicle’s performance, Michael Kelz, the EQC’s chief engineer, said:

On the one hand, it’s dynamic and powerful; on the other hand, it’s a quiet glider. It’s a new and at first unusual combination, even for us developers. The pre-production EQC offers a very safe driving feel and is also so much fun that it leaves a permanent smile on its driver’s face.

For more information about the issues discussed above, as well as many other electric vehicle and clean transportation opportunities, please contact me via my website or LinkedIn. I also invite you to subscribe to receive future posts via email, view my other posts, and follow me on Twitter.