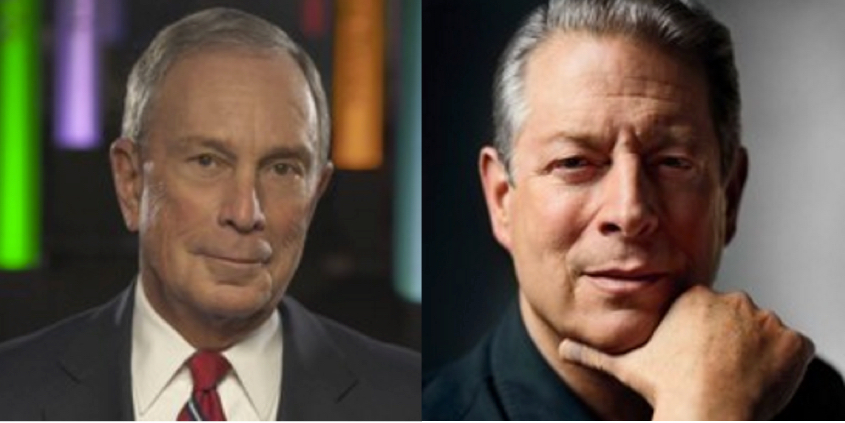 At the United Nations-hosted Investor Summit on Climate Risk this week Mike Bloomberg, Al Gore, and others urged businesses and philanthropists to invest more in renewable energy resources. The conference, organized by the nonprofit sustainable advocacy organization Ceres, is designed to sustain the momentum from Paris and catalyze further actions that investors, businesses, and governments can take to shift our economy to a low-carbon future.

A new report by Ceres and Bloomberg New Energy Finance titled Mapping the Gap reports that, to reach the level of investment in new renewable power generation needed to avert dangerous climate change, $12.1 trillion of investment will be needed over the next 25 years, which is $5.2 trillion above business-as-usual projections. Characterizing the subject of climate change as one of morality, akin to suffrage for women, civil rights, and ending slavery, Gore implored the audience to act, saying:

Our children’s future is at stake, our civilization’s future. . . . Encourage companies that [you] work with who disclose and mitigate carbon risk. Demand that the companies you work with move away from quarterly capitalism, and abandon the short-term-ism that has stunted investment opportunities. . . . It’s really important, especially where sustainability is concerned, because the extra value that can be unlocked by investors in companies that understand sustainability and are committed to it is, more often than not, unlocked over the longer term, the term during which real value builds up in real businesses.

Bloomberg called on the Securities and Exchange Commission to require companies to disclose their exposure to climate change and urged investors to avoid fossil fuel-fired power generation in the United States. Addressing the concern about “transition risk,” Bloomberg noted that, as with any change, “some people suffer and some people gain,” but that in this case the benefits outweigh the costs:

We all talk about losing a few jobs, but if you look at the balance sheet, on one side you may lose a few jobs, you have to net that against the new jobs you create in where you’re going, not where you came from, and then also look at the value of human lives. The press focuses on losing 10 jobs? What about the hundred people whose lives have been extended?

Acknowledging the structural change brought on by a shift to new energy sources, Bloomberg said “[U]nderstand that more jobs are created in solar and in wind, for example, than are lost. Society has an obligation to try to help people who are caught up in the move, but if you don’t move, then you get hopelessly left behind and you hurt everybody.”

Speaking to investors’ need for predictability in connection with the aggressive goals associated with the Paris agreement, Sue Reid, Vice-President of Climate & Clean Energy at Ceres, explained that “to fully bridge the investment gap, policymakers worldwide need to provide stable, long-lasting policies that will unleash far bigger capital flows. The Paris agreement sent a powerful signal, creating tremendous momentum for policymakers and investors to take actions to accelerate renewable energy growth at the levels needed.” Ken Locklin, of Impax Asset Management, who partnered on the research for Mapping the Gap, concludes that “Clean energy is a critical part of 21st century infrastructure, so this transformation is fundamental to our investment future.”