The Wait is Over: Elon Musk Unveils the Tesla Model 3 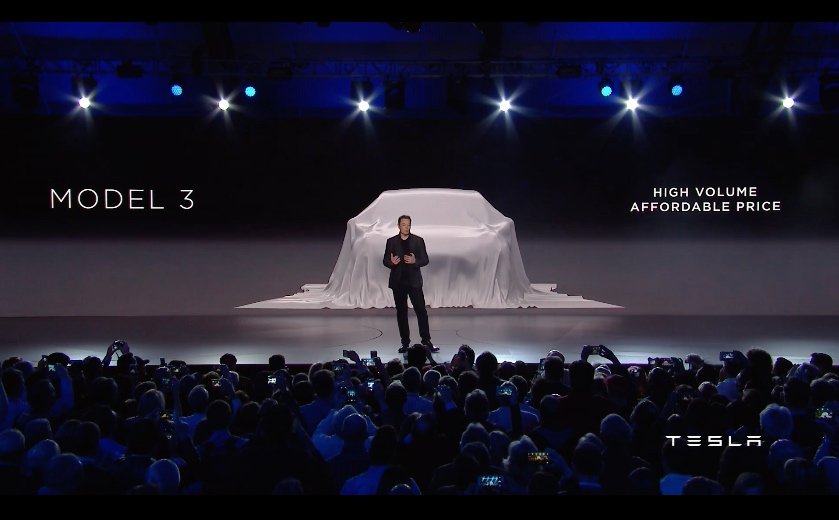 Elon Musk last night unveiled for the first time in public the Tesla Model 3. Musk expects the eagerly-anticipated car to ship by the end of next year, but that isn’t stopping more than 115,000 people (as of the time of Musk’s announcement) from placing $1,000 deposits for the hot new all-electric five-seater that will run at least 215 miles on a single charge, go 0-60 in less than 6 seconds, and retail starting at $35,000 before the $7,500 federal tax credit. Auto-pilot hardware and auto-pilot safety features will be standard, as will supercharging capability.

In explaining to a wildly enthusiastic in-person (as well as online) audience why Tesla is making electric cars, Musk said:

Supporting his assertion, Musk cited the alarming facts that the level of CO2 in the earth’s atmosphere recently passed 403 PPM, the highest concentration in 11 million years, that the planet-wide average temperature has increased by more than 2 degrees Fahrenheit since 1900, and that the extremes of temperature have increased by as much as 20 degrees.

Beyond global warming, Musk also pointed to an MIT study finding that more than 53,000 people in America die each year from causes attributable to transportation emissions. Needless to say, these emissions go away with electric transportation.

In Musk’s speech he referenced the very first blog he wrote for Tesla, which he calls “the secret master plan.” According to this plan, the company would start out with a low-volume high-price vehicle to show the world that a great electric car could be built. Although limited to 500 units per year, the car had a leveraged effect on the industry by spurring GM and Nissan to develop, respectively, the Volt and Leaf. 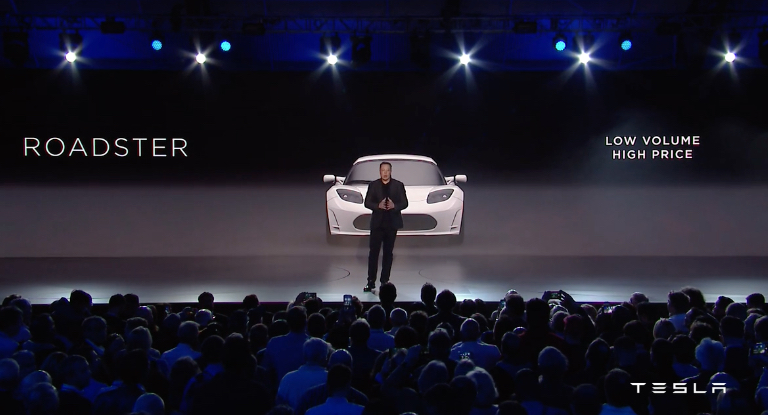 Recognizing that the Roadster was too expensive for a mass audience and not a true competitor to the great combustion sedans of the world, Tesla next developed the Model S. The Model S, which seats 7, has been widely cited as the best car of the year, if not ever. 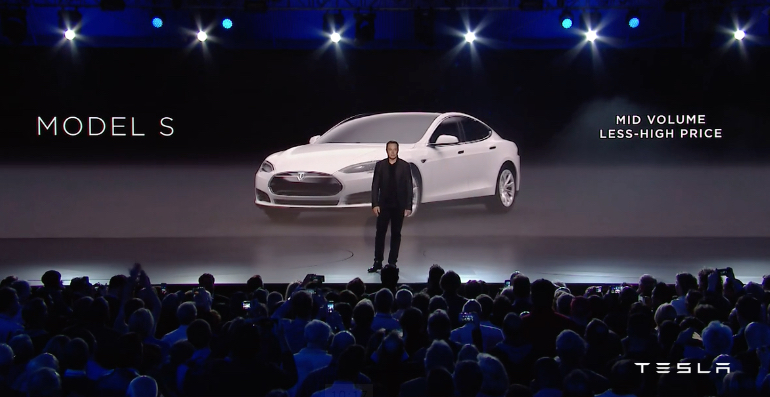 Because about half the market wants a sedan and the other half wants an SUV, Tesla recently extended the Model S platform to the Model X. 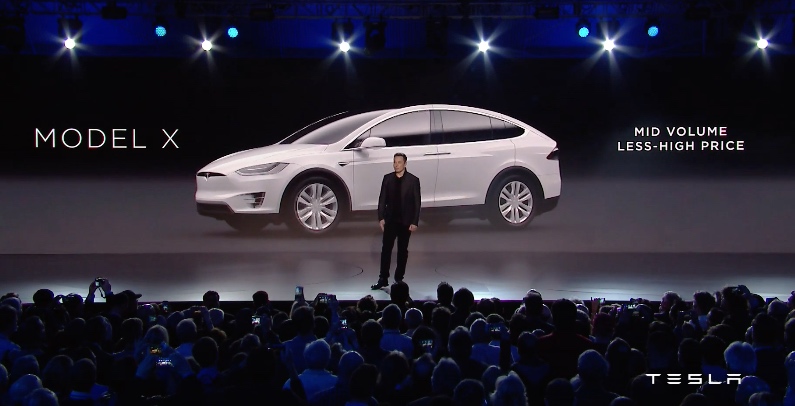 Both of these vehicles are critical, Musk explained, because:

“The engineering needed to achieve the cost reductions and the capabilities [for the Model 3] costs billions of dollars, so the S and the X are what pay for that Model 3 development. . . . For all of you who have bought an S or an X, thank you for helping pay for the Model 3.” 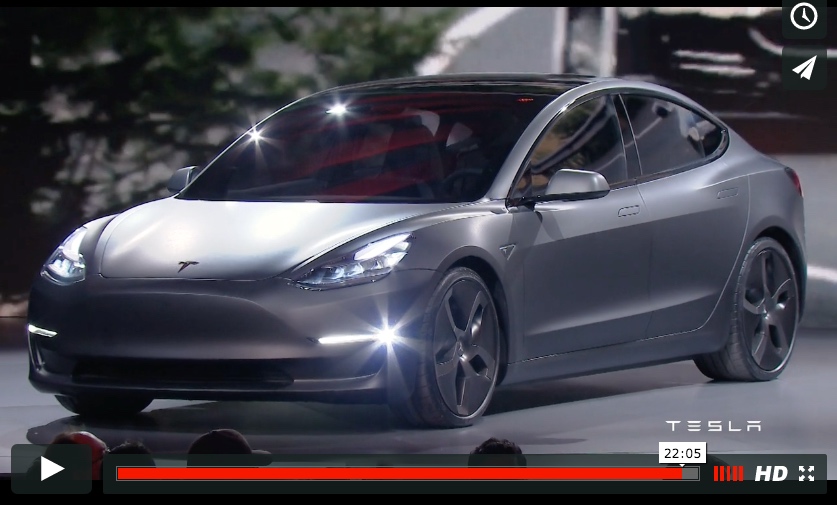 In unveiling the mass-market and affordable Model 3, Musk first emphasized the car’s safety features. The Model 3 will be, Musk said, 5-star safety-rated in every category.

“We really believe at Tesla that safety has to come first. We care about you. We want you to be safe, we want your friends and family to be safe, this is paramount.”

With regard to speed, even the base model will go 0 to 60 in less than 6 seconds, and there will be versions that go “much faster.”

As for range, the Model 3 will have an EPA rating of at least 215 miles, and Tesla “hopes to exceed” that. The Model 3 will also come standard with autopilot hardware and autopilot safety features.

Acknowledging the challenge many manufacturers face in fitting five adults into a smaller vehicle like the Model 3 comfortably, Musk explained Tesla was able to accomplish this, in part, by moving the front seats forward (possible due to the absence of a combustion engine), thereby providing the second row with extra inches of legroom. The second design feature offering a feeling of roominess is that the rear roof area is comprised of a single pane of glass, which gives more headroom than is available with a traditional roof.

Like the Model S, the Model 3 sports front and rear trunks. Overall, the Model 3 provides more cargo capacity than any gasoline car having the same external dimensions. Even a 7-foot long surfboard will fit on the inside according to Musk.

Given the size of the battery in the Model 3 and the need to charge rapidly, each Model 3 will come standard with supercharging capability. Left unsaid was how much Model 3 drivers should expect to pay to use Tesla’s network of superchargers; to date, owners of the much more costly Model S and Model X have had free and unlimited access.

Musk also took this opportunity to announce that the network of Tesla superchargers, which today numbers just over 3,600, will double to 7,200 by the end of 2017.

“The reason supercharging is important . . . is that it gives you freedom of travel. . . . You will be able to go virtually anywhere.”

As for so-called “destination chargers,” which are lower voltage and are intended for multi-hour stays, that number is expected to quadruple from fewer than 4,000 today to 15,000 by the end of next year. To make buying and servicing Teslas easier, the company will be increasing the number of retail locations from 215 today in North America, Europe, and Asia Pacific, to 441 locations by the end of 2017.

How will Tesla meet the expected demand for the Model 3? Musk explained that Tesla’s vehicle factory in Fremont (CA) is capable of producing 500,000 vehicles per year. With regard to batteries, Tesla expects to produce in a single year an amount of battery storage capacity greater than the entire world’s lithium ion storage in existence today. Tesla’s new facility in the Nevada desert, dubbed the “gigafactory,” has the largest footprint of any building of any kind in the world according to Musk, and by volume will be second only to the Boeing factory in the state of Washington. Battery production capacity is expected to be 50 gigawatt-hours per year.

Subtly noting previous product launch delays, Musk said he is “fairly confident” deliveries of the Model 3 will be at the end of next year. The price will be $35,000 before the $7,500 federal tax credit.

To date, Tesla has sold approximately 70,000 vehicles. With more than 100,000 customers on the waiting list for the Model 3 already, and with at least of year of Model S and Model X sales to come, by the time the Model 3 delivers the full tax credit may be elusive. Expect Tesla to maximize the credit by selling its 200,000th vehicle on the first day of a calendar quarter, thereby providing an effective 6-month (less one day) grace period before the reduction begins. 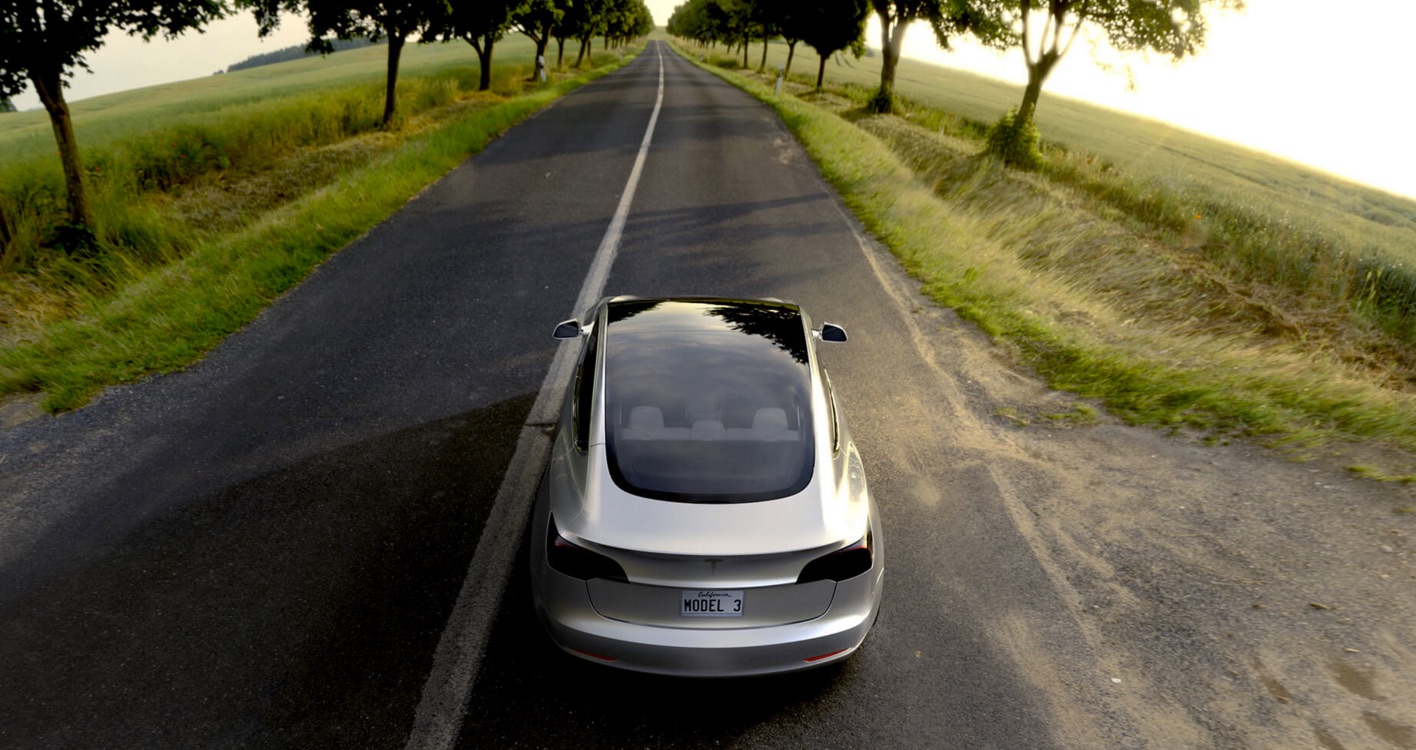