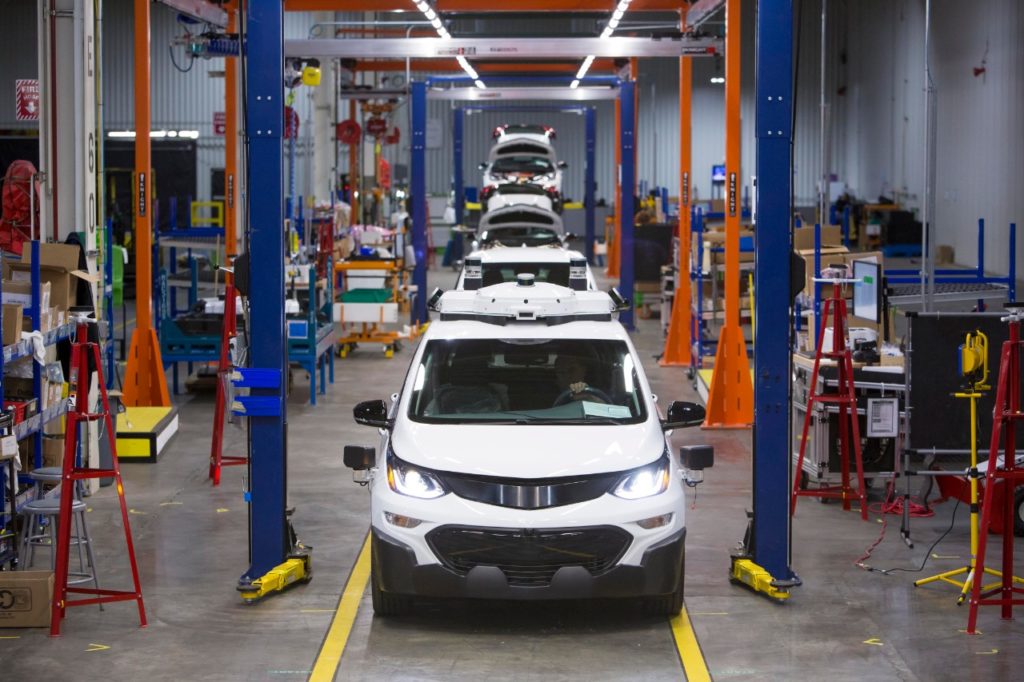 General Motors today announced that it completed production of 130 Chevrolet Bolt EV test vehicles equipped with its next generation of self-driving technology at its Orion Assembly Plant located in Orion Township, Michigan. This is unique in the automotive world because GM is the first company to assemble self-driving test vehicles in a mass-production facility, an undertaking the company began in January.

“This production milestone brings us one step closer to making our vision of personal mobility a reality,” said GM Chairman and CEO Mary Barra. “Expansion of our real-world test fleet will help ensure that our self-driving vehicles meet the same strict standards for safety and quality that we build into all of our vehicles.”

The self-driving Chevrolet Bolt EV features GM’s latest array of equipment, including LIDAR, cameras, sensors and other hardware designed to accelerate development of a safe and reliable fully autonomous vehicle. The vehicles being produced in Orion Township will join the more than 50 current-generation self-driving Bolt EVs already deployed in testing fleets in San Francisco; Scottsdale, Arizona; and metro Detroit.

“To achieve what we want from self-driving cars, we must deploy them at scale,” said Cruise Automation CEO Kyle Vogt. “By developing the next-generation self-driving platform in San Francisco and manufacturing these cars in Michigan, we are creating the safest and most consistent conditions to bring our cars to the most challenging urban roads that we can find.” GM and Cruise Automation engineers have been testing Chevrolet Bolt EVs equipped with self-driving technology on public roads in San Francisco and Scottsdale, Arizona, since June 2016 and on public roads in Warren, Michigan, since January 2017.

Referring to the synergetic relationship between electric and autonomous technology at a ceremony commemorating today’s milestone at Orion, GM’s Barra observed that the Bolt “has the onboard power capacity to operate the complex computing systems necessary for self-driving vehicles [and] it provides clear benefits for the urban environments where autonomous vehicles are most likely to be introduced – including zero emissions and quiet operation.”

The Bolt EV provides an EPA-estimated 238 miles per charge at a price below $30,000 after government incentives. GM characterizes the Bolt as “a zero-emissions car that is a technology platform, is fun to drive and puts our commitment to sustainability in our customers’ hands.” The Bolt builds on GM’s electrification experience that began with the Chevrolet Volt in 2010, and whose owners have now logged more than 2.5 billion electric miles.

The National Safety Council estimates as many as 40,000 people died in motor vehicles crashes in the U.S. last year, a 6-percent increase over 2015, and more than 90 percent of crashes are attributable to human error. “That is something that autonomous vehicles have the potential to eliminate,” said Vogt.