On March 7, I wrote about the high quantity of natural gas in storage this winter. Because natural gas is the fuel most prevalently used to generate electricity in most parts of the country, an increase in stored natural gas is likely due, at least in large part, to a decrease in withdrawals for power generation. Now that electricity usage data from January (the latest month for which data is available) is in, we see evidence of why storage is increasing. The U.S. Energy Information Agency reports that retail electricity sales volumes fell in 42 states and the District of Columbia in January (marked in blue below). 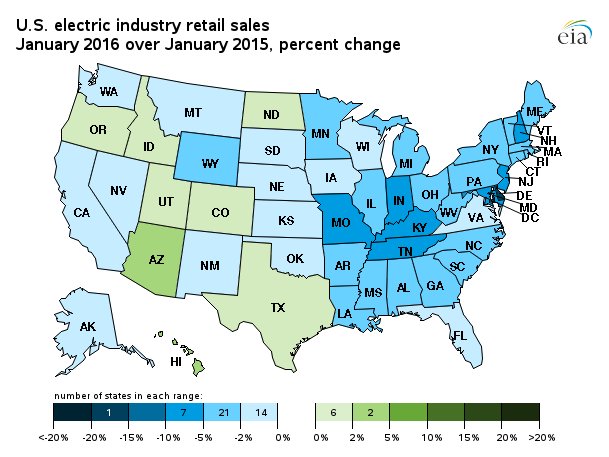 On a percentage basis, Delaware led the pack in the year-over-year decline with a decrease of more than 15%. Next were New Jersey (-8%), Tennessee (-7%), Indiana, and Maryland (both down 6%).

Nationally, among the four end-use sectors which include Residential, Commercial, Industrial, and Transportation, the Residential sector experienced the largest decline in sales volume (-4.9%) in January 2016 compared to January 2015. The most likely cause for this decline was a reduced need for home heating in 2016 due to average temperatures being warmer than the year earlier. 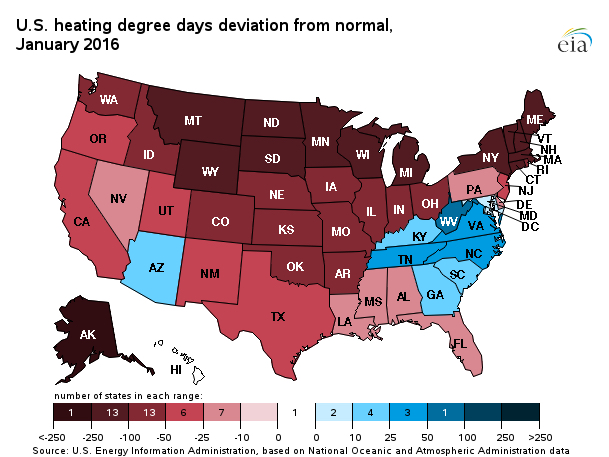 Heating Degree Days increased in 28 states across the Southeast and West and the District of Columbia, indicating colder weather in these regions compared to last year. California had the largest Heating Degree Day increase, up 33%, followed by Florida, up 31%, and Nevada, up 23%. Despite the increase in some states, the country overall experienced a net decrease as indicated by the lower electricity usage described above.

As economists would predict, lower quantity demanded was generally accompanied by lower prices. The following map shows that average revenue per kilowatt-hour decreased in 27 states and the District of Columbia, and increased in 23 states in January compared to last year. 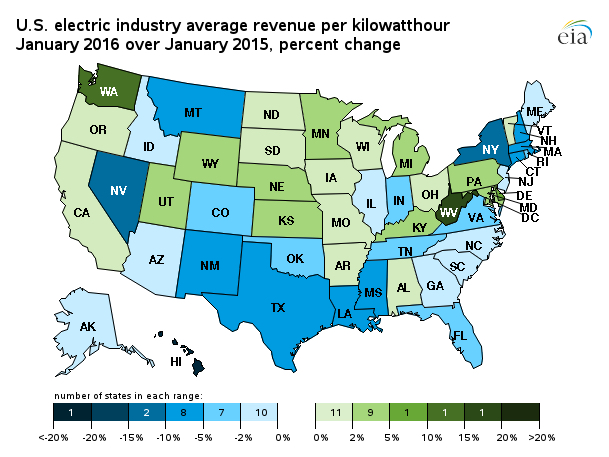 Average revenues per kilowatt-hour across all sectors were 9.96 cents in January, down 2.2% from last year. Hawaii had the largest decrease for the thirteenth month in a row, down 20% from last year as lower world oil prices continue to benefit Hawaii’s largely petroleum-fueled bulk power system. The next largest year-over-year declines were found in New York, down 13%, and Nevada, down 11% from last year. The largest year-over-year increase occurred in West Virginia, up 16%, followed by Washington, up 11%, and Delaware, up 9%.