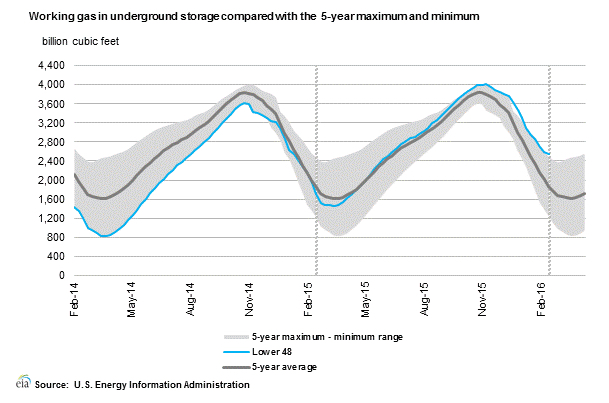 The U.S. Energy Information Agency (EIA) reported last week that the amount of natural gas in storage for the week ending February 26 exceeded the year-ago total by 46 percent, and the five year average by 36 percent.

Despite a sustained fall in commodity prices (see table below), which should spur demand, the combination of high injections and low withdrawals resulted in the unusually high 2.536 billion cubic feet (Bcf) in storage for the week ending February 26. (Overall production in 2015 was 5.4% greater than 2014, and consumption is down due to recent warm weather, with December at the lowest level in 31 years).

Meanwhile, the Henry Hub spot price fell 11 percent for the week ending March 2, from $1.79/MMBtu on February 24 to $1.59 on March 2. On March 1 the price reached an intraweek low of $1.57, which is the lowest nominal Henry Hub price since December 1998. Other major market locations saw similar declines. At the Chicago Citygate, the spot price fell from $1.80/MMBtu last Wednesday to $1.72 yesterday, hitting an intraweek low of $1.68 on Monday. The Chicago Citygate price hasn’t been below $1.68 since March 1999. At the SoCal Citygate, prices fell from $1.87/MMBtu last week to $1.71 yesterday, hitting a low of $1.59 on Monday as well. This is the lowest SoCal Citygate price on record.

According to the EIA:

If withdrawals follow the five-year average for the remainder of heating season . . . [t]his would mark only the second time that working gas stocks finished the heating season above 2,000 Bcf [at 2,275 Bcf).