Audi this week introduced the Q8 sport concept, a stylish SUV featuring a super fuel-efficient “mild hybrid” drive system. Mild hybrids are a class of vehicles distinct from traditional hybrids and all-electrics such as the Prius or the Tesla.

The distinguishing feature of mild hybrids is a 48-volt electrical system with a relatively small battery that provides electricity to heavy loads such as the air conditioner compressor. By relieving the gasoline engine of powering heavy electrical loads, the vehicle achieves better fuel economy because all of the gasoline is directed only at moving the vehicle. The battery is charged through regenerative braking.

Another benefit of the 48-volt system is that it can power an electric traction motor to supplement the internal combustion engine, producing additional horsepower without consuming more gasoline. In the case of the Q8 sport concept, the combination of the 3.0 liter turbo-charged six-cylinder gasoline engine with a 20 kW electric motor produces a total of 469 hp and 516 lb-ft of torque (which is 25 more gasoline-free horsepower than without the electric motor). Acceleration is 0 to 100 km/h (0 to 62.1 mph) in 4.7 seconds with a top speed of 170.9 mph. 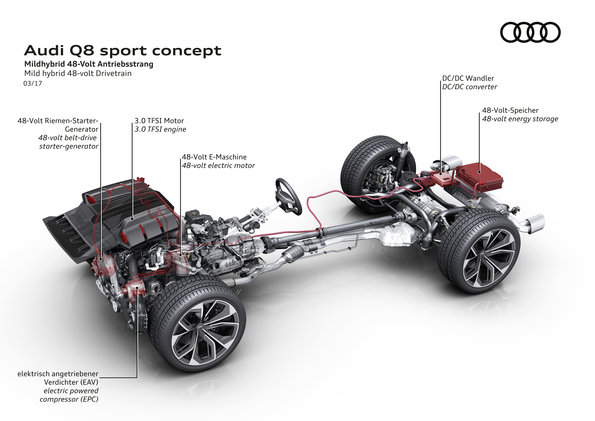 In addition to the electric motor’s contribution to horsepower, the Q8 sport concept’s 48-volt system enables delay-free turbo acceleration in a V6 for the first time, according to Audi. Six-cylinder engines typically do not produce enough exhaust gas for instant turbo power, but the Q8 sport concept’s 48-volt electric system can accelerate an electric compressor from 0 to 70,000 RPM in less than 250 milliseconds to instantly provide the air that the turbocharger requires. The result is faster acceleration than typical for an SUV, and 8-cylinder performance with 4-cylinder fuel consumption. Total range based on the vehicle’s 22.5 gallon fuel tank is 745.6 miles, for an average fuel economy of more than 33 miles per gallon.

Finally, the Q8 sport concept’s 0.9 kWh battery makes it possible to keep moving slowly in stop-start traffic with the combustion engine switched off, as well as allowing for maneuvering and parking under electric power alone.

“The drive system of the Audi Q8 sport concept is a major step towards optimizing efficiency and sustainability in large-volume series production. The combination of mild hybrid technology and a [turbocharged fuel stratified injection] engine sets a new benchmark for the synthesis of electromobility and combustion engines. In the future, this combination will be used in many Audi models,” says Rupert Stadler, Chairman of the Board of Management at Audi AG. 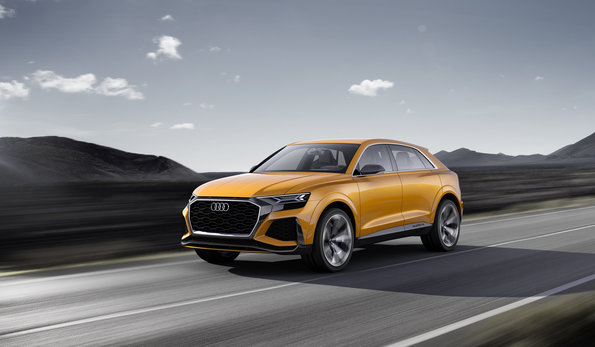 By providing power for the many high-energy systems, 48-volt mild-hybrids are a relatively low-cost stepping-stone in the march toward greater electrification and, if incorporated into millions of vehicles, do represent a meaningful (yet modest) increase in fuel economy and decrease in tailpipe emissions. While the benefits of these otherwise-traditional vehicles fall short of the game-changing advances in fully-electric vehicles, incorporating a 48-volt system nonetheless improves fuel economy at a relatively low cost per unit of efficiency.